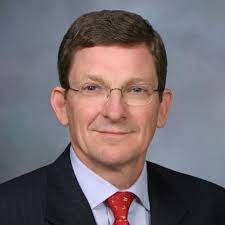 Join Global Santa Fe members and guests for an elegant buffet luncheon at La Terraza followed by a lively discussion with Ambassador Marc Grossman on Creating an American Diplomacy Ready to Meet the Challenges of the 21st Century.

Each year, Global Santa Fe takes a close look at the state of the State Department. Marc Grossman joins us to discuss “Blueprints for a More Modern U.S. Diplomatic Service,” co-authored by Ambassador Grossman and Ambassador Marcie Ries. It follows up a November 2020 report from the Harvard Kennedy School Belfer Center written by Grossman and Ries with Ambassador Nick Burns (before Burns went to Beijing to serve as the U.S. Ambassador to China) that proposed an ambitious agenda for changes to the State Department.

“Blueprints for a More Modern U.S. Diplomatic Service” is an actionable guide for producing significant changes in the way the United States organizes and executes its diplomacy. Released in September 2022 by Arizona State University, each of the four Blueprints outlines areas for action chosen from the Belfer report. Join the talk to learn more about them. Ambassador Grossman also will discuss the critical diplomatic challenges facing the U.S. this year, including the war in Ukraine, and meeting the rise of China.

Drawing on a distinguished career in the U.S. Foreign Service, Grossman is uniquely qualified to address the reforms that are needed to strengthen American diplomacy. Among his many posts, he served as Under Secretary of State for Political Affairs, the State Department’s third ranking official. Other positions included U.S. Ambassador to Turkey and Assistant Secretary of State for European Affairs. In February 2011, following the death of Ambassador Richard Holbrooke, Grossman was called back to service as the U.S. Special Representative for Afghanistan and Pakistan.

Ambassador Grossman served as the Under Secretary of State for Political Affairs, the State Department’s third ranking official, until his retirement in 2005, after 29 years in the US Foreign Service. As Under Secretary, he helped marshal diplomatic support for the international response to the terror attacks of September 11, 2001. He also managed US policies in the Balkans and Colombia and promoted a key expansion of the NATO alliance. As Assistant Secretary for European Affairs, he helped direct NATO’s military campaign in Kosovo and an earlier round of NATO expansion. In Turkey, Ambassador Grossman encouraged vibrant US-Turkish political, military, and economic relations.

CLICK HERE TO REGISTER FOR THE LUNCHEON with Ambassador Marc Grossman at La Terraza.