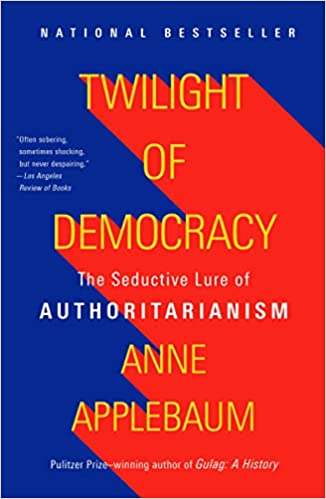 Join us in-person or via Zoom on Tuesday, August 2nd at 5:00 P.M. for our next meeting of the Book Club when we will discuss ‘Twilight of Democracy: The Seductive Lure of Authoritarianism’, by Anne Applebaum. Light refreshments provided.

Anne Applebaum is an award-winning historian of Soviet atrocities who was one of the first American journalists to speak publicly about antidemocratic trends in the West. In this essay, Applebaum discusses the lure of nationalism and autocracy where she argues that political systems with extremely simple beliefs are inherently appealing, especially when they benefit the loyal to excluding all outside opinions, people and ideas. Elegantly written and urgently argued, Twilight of Democracy is a fantastic dissection of current world-shaking shifts and a glimpse of the road back to democratic values.