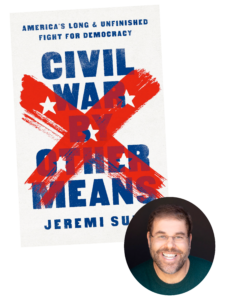 In 1865, the Confederacy was comprehensively defeated, its economy shattered. Yet in the years that followed, Lincoln’s vision of a genuinely united country never took root. Author Jeremi Suri, Mack Brown Distinguished Professor for Global Leadership, History, and Public Policy at the University of Texas at Austin, explores the conflicts and questions Americans wrestled with as competing visions of democracy, race, and freedom came to a vicious breaking point. The recent shocks to American democracy are rooted in this forgotten, urgent history.

Under Fire is Global Santa Fe’s signature series featuring new perspectives on topics from journalism to democracy to climate change. The series began in 2018 when we were still called Council on International Relations (CIR) with Journalism Under Fire, a global conference engaging thousands of attendees. Now the series is back, launching with talks from three authors of two groundbreaking books.