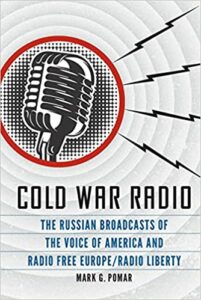 Cold War Radio breaks new ground as Mark G. Pomar integrates his analysis of Cold War radio programming with the long-term aims of U.S. foreign policy, illuminating the role of radio in the peaceful end of the Cold War. Pomar looks at how the United States waged the Cold War through the international broadcasting of Voice of America (VOA) and Radio Free Europe/Radio Liberty (RFE/RL). Pomar served in senior positions at VOA and RFE/RL from 1982 to 1993, during which time the Reagan and Bush administrations made VOA and RFE/RL an important part of their foreign policy.

Pomar takes readers inside the two radio stations to show how the broadcasts were conceived and developed and the impact they had on international broadcasting, U.S.-Soviet relations, Russian political and cultural history, and the dissolution of the Soviet Union. Pomar provides nuanced analysis of the broadcasts and sheds light on the multifaceted role the radios played during the Cold War, ranging from instruments of U.S. Cold War policy to repositories of independent Russian culture, literature, philosophy, religion, and the arts.