Dipo Faloyin, Africa is Not a Country: Notes on a Bright Continent 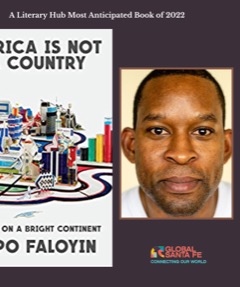 Book Talk  – Africa is Not a Country: Notes on a Bright Continent with author Dipo Faloyin

So often Africa is depicted simplistically as “one” and not a continent made up 54 separate nations, an arid red landscape of famines and safaris, uniquely plagued by poverty and strife. In his debut book, Dipo Faloyin offers a compelling and needed corrective, weaving a vibrant tapestry of stories that bring to life Africa’s rich diversity, communities, and histories. Faloyin’s book is an exuberant, opinionated, stereotype-busting portrait of contemporary Africa in all its splendid diversity, by one of its leading new writers.

This event is a virtual book talk in which Dipo Faloyin will be in conversation with Jim Falk of Global Santa Fe. It will be livestreamed on Zoom.

That Africa is often considered simplistically as “one” and not a continent made up 54 separate nations has sadly been a common thread as much of the reporting and popular commentary are seen through Western eyes.  Africa Is Not A Country is a bright portrait of modern Africa that pushes back against harmful stereotypes to tell a more comprehensive story.

In his debut book, Dipo Faloyin offers a compelling and needed corrective.  He successfully unearths surprising stories about many African countries’ colonial heritage” linking and explaining how they have impacted the continent’s continued struggles with democracy. He examines each country’s colonial heritage, and explores a wide range of subjects, from chronicling urban life in Lagos and the lively West African rivalry over who makes the best Jollof rice, to the story of democracy in seven dictatorships and the dangers of stereotypes in popular culture.  He devotes attention to the youth-led political and social movements that are shaping the future of many of the countries.

His deep knowledge combined with humor and engaging delivery guarantee that the conversation will be entertaining, leaving you with greater respect and certainly understanding of the region.

Dipo Faloyin is a senior editor at VICE, where he focuses on race, culture, and identity around the world. His writing has appeared in Dazed, Prospect, and HuffPost. Born in Chicago, raised in Lagos, he now lives in London.